Summary of Our Steelhead Fly Fishing Trip in 2013

It goes without saying that fishing for steelies in British Columbia never stays the same from one year to another.

Keeping that in mind, my conclusions below are altogether subjective. They are based on my experience within the last 23 years, including about 40 trips to BC, and well-trained fishing instincts. 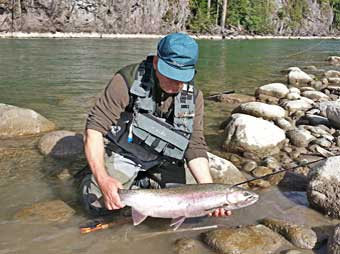 In the years from 2008 to 2010, the number of fish I caught went up considerably every year. I had my best result in 2010 when I caught 44 steelies during a 3-week-trip. In 2011, I suffered a severe setback, but I blame that on the weather. In 2012 I decided not to travel to to Western Canada due to newly introduced restrictions for anglers from outside Canada, like me from Germany.

In 2013, we decided to travel steelheading to BC in a party of 4. Let me make it clear once more that I fish for this species exclusively with nymphs or dries with singlehanded rods - usually a #7 or #8 of 9 feet 6 inches. My traveling companions use similar gear.

The Bulkley river, on which I averaged 3 steelies a day in other years, turned out a total failure in September 2013. The four of us totaled 3 strikes in 4 days of fishing - only one was landed!

The Copper river, on the other hand, had a good number of steelies in the river, permitting me to play 7 of them, in one single day.

When the North, i.e. Bulkley river, Copper river, Kispiox river etc., doesn't yield a lot of fish, sometimes Vancouver Island can make up for that. It couldn't be done in 2013, though, because the ferry from Horseshoe Bay to Nanaimo could not sail due to a violent storm. Looking back, we had to admit that this cancellation had been a streak of luck, because the rivers on the island didn't recover from the rainfall before our scheduled departure back to Germany.

The best result within our group was 15 landed steelhead (and it wasn't me!), followed by 10 or less. If I had to grade this trip, I'd give it a C minus. On the other hand: if numbers keep going up every year, you better get ready for a setback. Let's look ahead and see what the future of fly fishing for this kind of fish in British Columbia has in store for us