From Vancouver Island to Hope via Lillooet 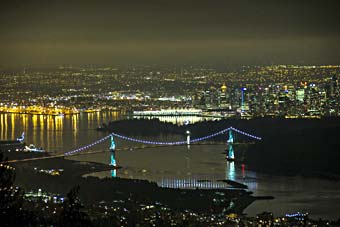 After finishing my business on Vancouver Island, I took the last ferry back to the mainland, where I arrived shortly after 11 pm. At that time I still lacked some nice night views of Vancouver, which I could finally shoot from the lookout point on Cypress Bowl Road.

Then I got moving again towards Lillooet to get at least a good part of those 250 kms behind me. I had planned to make it at least to Whistler, and then do the rest of the drive on the following day. Starting from West Vancouver you take Highway 99 along the seashore for 45 kms to Squamish and then continue on the same highway direction East into the mountains.

I reached Squamish at 1:30 a.m. and I saw a lineup of cars and some police officers near the city limits. When I got there, there were just about six cars left in front of me. The officer would talk to each of the drivers for a couple of seconds and then would move on. The whole thing ground to a halt when he got to my car. I suppose he didn't appreciate those three empty beer cans on the console beetween the front seats. He told me to drive off the road, which I did without hesitation. Sorry, but on my way off the road I ran over one of these little plastic cones which I had no chance in the world of seeing, and, sorry again, the officer wasn't very happy about that. 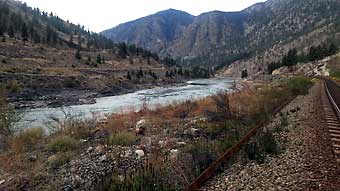 Starting Point for the 24 km Hike on the Thompson

Well, he told me to get out of the car, and as I opened the door, he spied three more empty beer cans in the compartment inside the door. His tone arriving at an almost nervous pitch by then, I refrained from comments. He took a little sprint to his car and whizzed back to me wielding an Alcomat (that's what we call those little gadgets police officers use to measure alcohol in a suspect's breath - I don't know the appropriate English term). He then read me a text from a palm-sized paper at breathtaking speed, ignoring my request to slow down because of my being an alien. Then I had to start blowing into that little apparatus until it finally clicked.

I wasn't feeling too well while we waited for the result. We were looking at the little display and I just couldn't remember, when I'd had that last beer. Had it been on the ferry, had it been when I had taken those photographs or ... All of a sudden the display displayed: a whole bunch of big fat zeroes! This made me feel a whole lot better, and when the officer started addressing me as "Sir" again, I had a hard time suppressing a grin. Well, he wished me bon voyage, and advised me not to kill any more of those plastic cones. 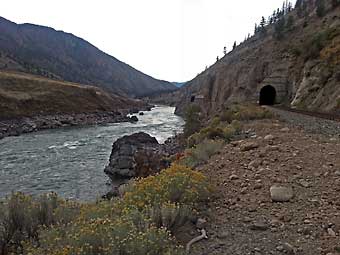 The next day, I reached Lillooet. I had planned on three days of gold panning on Cayoosh Creek and Thompson River. The Thompson brought me luck. Not that I struck gold, but I had an encounter with a rattler and did not get bitten - good enough for me.

I started early in the morning. the place where I wanted to pan gold was 12 kms from where I parked the car, and I had to carry 16 kilograms of baggage on my way there, 6 kilograms of that being food and water. A noon the temperature hit 27°C. Well, the whole trip inclusive of digging took me 10 hours, and on the last few kilometers back to the car I wasn't always sure I'd make it.

Trodding step by step back to the car I hadn't been paying too much attention to my environment, when a sharp rattling sound brought me back to my senses. A rattler had taken a sunbath between the rails, and maybe it had taken a little nap. Anyway, it only started to rattle after I had already passed. Maybe it wasn't the smartest idea to walk back a few steps to take its photograph. Some people claiming to have experience with rattlesnakes asked me if I maybe had a nut loose in my head. Well, I'm glad I got by unhurt, and I won't try again.

By now it was time to get going to Hope. 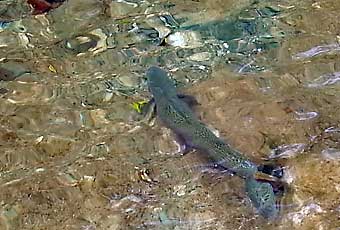 Hope looks to me like a sort of outpost, where regular work has run out. We'll have to see what the future brings. In 2014, the last three days were disappointing as far as fishing is concerned. It didn't take too long to outsmart one steelhead, but that was it. I should find out on the following day why the situation was as it was. In low water conditions the fish have always had problems running up the canyons, so this was the place to check.

As I got close to the canyon, lots of trailers and construction equipment forebore disappointment. I talked to the foreman on the site and he told me that a rockslide had completely blocked the canyon for steelhead trying to run up to their spawning grounds (for further info on the Coquihalla rock slide click here). The two steelheads I caught on the Coquihalla had been caught downstream and carried up in in tanks by the local band of the First Nations. Upstream they had been released and could hopefully hatch the next generation.

Unfortunately, the situation is still unresolved to my knowledge. 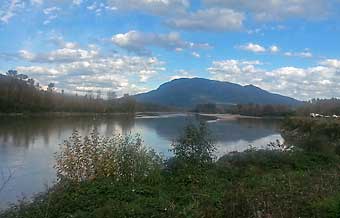 Finally a Night on the Fraser.

In the last years we've made a habit of spending the last days quietly on a river holding steelhead. Everyone is free to chose if he wants to fish until the very last moment or if he'll get his stuff dried and packed ready for takeoff. The tour is usually strenuous - you drive lots of kilometers and you might always run into unexpected stressful situations. There is hardly any place around that would bore you. My fellow travelers usually take advantage of this cooling-off-period to review and sum up the trip's events.

For the last night, it is advised to pick a place not too far from the airport. Your bags are all packed and you can rest your soul - a beer or two won't hurt. This time I stayed on the Fraser River. I had a nice talk with some anglers fishing for sturgeon. Nice to get a view of this entirely different way of fishing firsthand.

The next morning I had a good breakfast and rolled on to Vancouver Airport. Returned the car to the rental office after checking all the compartments for lost items. Sometimes I catch myself wondering what if I just stayed.

Well , my report on our 2014 steelhead trip turned out longer than I thought. But still there remain events untold for lack off space. I wish I could inspire a desire for these adventures. See you sometime British Columbia ...

to the articles page