Fly fishing for Steelhead on the Coquihalla

Update October 2016 on the Situation on the Coquihalla

The situation on the Coquihalla has not improved the least bit since the rockslide in 2014. It is still practically impossible for the steelhead to reach their spawning grounds. Discussions with the Fish and Wildlife Bureau in Surrey have been futile. All the talks have produced nothing but hot air, and to my knowledge the Bureau has not taken any position whatsoever.

The reactions of the locals are even more depressing. Talking to people interested in wildlife and nature in general you sense their resignation and disappointment. To make that experience in the country that gave us Greenpeace feels bitter. I admit that conservation has had lots of success in Canada, but on the other hand we can´t turn a blind eye to the fact that even there something is definitely going wrong.

Motivated locals catch steelhead by hand and carry them around the obstacles so a minimum of ripe spawners may get into the headwaters. This minimum is somewhere around 80 to 100 specimens. Unfortunately it seems impossible to organize a group willing to fight politically for the Coquihalla as a habitat for steelhead. This river is a jewel among British Columbia´s rivers and would be well worth the effort.

Problems on the Coquihalla with fly fishing

The Coquihalla is a small river in the South of British Columbia. It joins the Fraser River near the town of Hope that some of you may know from the movies as some footage of the Rambo movies has been recorded in this area. This creek hosts a pretty good steelhead summer run and is relatively easy to fish with nymphs due to its size. You might also give dries a try - either upstream or on the swing. 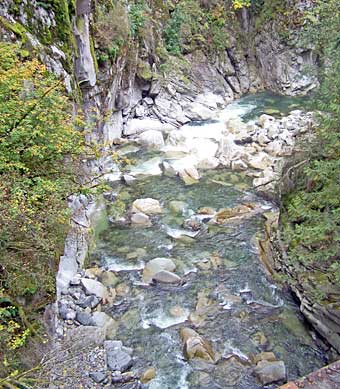 one part of the Coquihalla canyon

the place where the run is blocked by a rock

In 2014 I only caught two steelies in three days which is well below average (3 fish/day). The reason was not particularly shy or picky fish, as I was to find out. 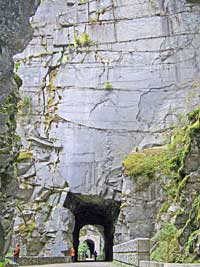 There had been a rock slide in the canyons below the stretches of the river accessible to anglers. A rock also serving as a pillar holding up one of the pedestrian bridges had slid down and toppled right into the river. The bridge had suffered so much damage that the trail through the Othello Tunnels had to be closed. The Othello Tunnels are old railway tunnels from which the rails have been removed and which have since been used as part of a hiking trail. The bigger problem from the anglers' point of view, however, is the fact that the rock slide keeps blocking the run and spawning on the river for steelies is at risk. When I visited the area, a crew was about to fix the damages. They told me that they were commissioned not only to repair the bridge, but also to clear the way for fish to move upstream to spawn. The company was interested in undoing the bottleneck - though in a rather rustic way (TNT) - as they had frequently had good jobs doing maintenance work on the trail in the canyons. They would even do the blasts at their own expense.

Now the Coquihalla normally is the first river we fish on our trips to BC, as it is not too difficult to fish with a fly. The first two days in Hope give anglers a chance to adapt to the climate and their jet lag and maybe also hook a steelie or two. After that, they're ready to move on towards the North and test their skills on the Bulkley, the Kispiox and other famous rivers.

the Coquihalla above the tunnels

So I tried to get some information on the current situation on the creek. The results have been devastating. The bridge has been fixed, but the bottleneck for the fish is still not resolved. So this year is the second in a row without a steelhead run. Two more years like this and the steelhead run on this river will be history!

In early August I have contacted the Office of Fish and Wildlife in Surrey, BC. This office's responsibility goes as far as Hope, so they're the ones in charge of the rock slide. After being given the runaround for a little while, I managed to make contact with a person authorized to discuss the matter. Yes, the problem was known at the office, and there were plans under way and diverse considerations were being duly considered. My question which details about the blasting of a rock slide had to be planned for a year seemed not to be appreciated. I didn't get much of an answer, neither did I on the question when, and if at all, action would be taken.

So I plan to show up in person during my vacation and try to find out more about the Coquihalla's steelhead chances of survival. I'll update this article in October.