From the Kispiox River to Gold River on Vancouver Island 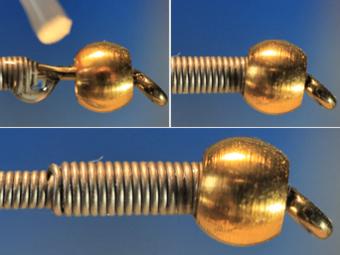 Get as much weight as possible inside your nymph

When I mentioned a long leader, I mean straight .25 mm Stroft, 4 to 6 m long. The nymphs I preferably use are tied on hooks of adequate size holding a brass or tungsten bead head plus lead wire wraps all along the shank, two layers on the thorax area. You had better practice your cast with this combination of leader and weight well before leaving for Canada. Unfortunately some guys just don't take that advice seriously, and end up practicing their cast in BC instead of catching fish.

With this kind of nymphing, too short a leader (e.g. less than 4 m on the Bulkley) will considerably reduce your success.

It does seem kind of crazy to drive all the way from Vancouver for merely three days of fishing. I had planned, however, to meet a retailer, well known among fly fishers, on the Kispiox.

The meeting had been agreed on, I knew his whereabouts on the Kispiox, and I could use the first weekend for excursions and some photography. Let me remind you that to fish on weekends, you would have to hire a guide. I used Google to check the possibilities. The price is Can$ 600 for one person or Can$ 1100 for two, this price includes lunch and pick-up service but excludes tax. So for one angler the price for one weekend would be Can$1200 plus 12 % tax.

So I decided to go sightseeing. The countryside around Smithers has quite a lot to offer, like the Hudson Bay Mountain Area. Although there is a lot of logging going on, the forests surrounding Smithers still seem endless. In these forests, you find beautiful lakes which are sometimes very well stocked. Driving around, I happened to find a road leading to the upper stretches of the Copper River.

I hope we'll have a chance to fish the upper Copper in 2015 from Smithers. It is a drive of about 65 kms as compared to 235 kms from Highway 16 to the pools above the Clore River.

On the upper Copper River

At noon on Sunday it was about time to get going towards the Kispiox. Kispiox is roughly 85 kms from Smithers, and from there to the meeting point I had another 10 kms which is a very short distance by Canadian standards. The Kispiox presented the same picture as the Copper did a week earlier: high and dirty. On a ride of 20 kms along the river I didn't spot a single angler, so I went to the Steelhead Camp (I have known the proprietors from Austria for over 10 years), and I was told that the sitiuation had been extremely lousy for several days, and there remained practically no hope they would improve within 4 or 5 days.

I had to make a decision. The only day I had left for fishing would have been Monday, after that I had already made a couple of appointments. It would take at least 11 hours for my fishing buddy to get there. I would have liked to share at least a beer with him in Canada. On the other hand, these hours could get me 700 to 800 kms closer to my next destination so I decided to get going. Later on I heard he arrived a day late anyway, so my decision had been the right one.

There are several ways to drive from Kispiox to Gold River on Vancouver Island. The shortest drive is roughly 1500 kms and includes 90 minutes on the ferry from Vancouver to Nanaimo. Gold River is on the West Coast of Vancouver Island, that's the reason you have to take the ferry. The way back is slightly different from the trip up North. You drive via Lilloet, Pemberton and Whistler to the ferry port west of Vancouver. This change has several advantages. The trip leads across the Coast Mountains with lots of beautiful scenery, it is slightly shorter , and finally you won't have to drive all across Vancouver. 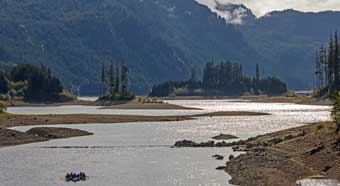 Lack of water in the upper Campbell Lake

I arrived at the port in time for the day's first ferry and was sailing to Nanaimo on Vancouver Island by 6:20 a.m. . For some time already the island had been suffering from lack of rain. The rivers on Vancouver Island frequently have either too little or too much water. Only about one year in five has good fishing conditions. The other years do sometimes render all fishing impossible, not counting the lakes or the sea shore.

That's what happened to us in 2013. Even our attempt to get to the island failed because the day's last ferry had been canceled. The same evening I phoned a friend on the island, and he practically congratulated us on not having made the ferry. In his opinion there were no conditions suitable to fishing to be expected within the next three weeks. He considered the money we had not spent on the transfer - about $ 400 for two vans to get there and back - a windfall profit.

In 2015, conditions were at the other end of the scale. The low water levels in the Upper Campbell Lake were alarming.

Gold River is a quaint little town on the western side of Vancouver Island. The distance to the Gold River Inlet is about 15 kms, The inlet itself is about 25 kms long until it reaches the open sea. Over 15 years ago, my wife and myself had given serious thought to the idea of emigrating to Gold River. At that time, the local population was over 1,400 souls, but when the largest local employer closed, numbers dropped sharply. Now a certain recovery seems to be taking place. 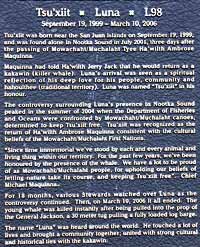 In earlier years I visited Vancouver Island every winter, but within the last eight years I went there only twice. Normally late February would be a good time to visit. A stay of 10 to 12 days should be enough to break our European winter routine. Around that time of year flights and accommodation are not too expensive, but you should also be prepared for constant rain. Of course, the Gold River is not the only river worth fishing, almost all the streams and rivers on the island have a winter run.

One of the Gold River's tributaries is the Heber, a nice little stream also holding a population of steelhead. On this stream, however, two anglers is one too many. Due to the gin clear water, the steelhead are extremely shy. So I was extremely disappointed by the low water conditions I found. I managed to coax a few steelhead out of two pools, but it was far from what I'd call hot fishing.

All the other rivers on the island were very low, too, so I spent a couple days gold panning and taking care of my old stocks dating from the time I had my own wholesale company for flyfishing supplies.

To be continued in the next part, dealing with Lilooett and the Coquihalla River in British Columbia Canada.