With Bead Head Nymphs and Dries in British Columbia / Canada 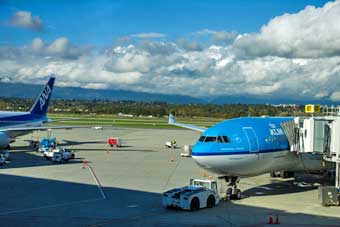 Be it KLM, Lufthansa, Air Canada or Air Berlin - they have all managed to get me to the West Coast just fine.

Steelhead fly fishing trip 2014 part one, with nymphs and dries in British Columbia

For the first time since I had begun fly fishing for steelhead in 1990, I traveled in British Columbia Canada all on my own. The trip lasted for 25 days and took 6,000 kms on the road. On September 26th I took a KLM flight from Nuremberg to Amsterdam. In Amsterdam there was no time to tarry because boarding started as soon as I could make it to the gate. Including the transfer at Amsterdam, the trip to Vancouver took twelve hours and forty minutes.

had set for myself several goals for this trip, one of them being to get by with as little money as possible on the condition not to starve nor to freeze. I didn't manage to avoid the latter altogether, but I'll tell you about that later.

Accommodation and outside deck

Like I had done on many previous tours, I had booked on the Internet a 7 seat Dodge Grand Caravan from Alamo. Their rental station is is right at Vancouver Airport and can be accessed easily even with lots of baggage due to the fact that baggage carts are available free of charge in Vancouver - other than at many other airports.

So I entered the Alamo office with all my belongings. Being the first in line, I think I could get the formalities done quickly; well, so I thought ...

The clerk behind the counter was quick to fill in the forms andvproceeded to hand me the keys after just a few minutes. But due to some problems in the previous year, I wasn't that quick to accept. He was completely surprised by my asking for tires with a reasonable amount of tread left on them. He told me that such matters were entirely outside his responsibility and he wasn't really interested in hearing my story about last year's two blowouts either. Only when I threatened to camp in his office for the night he was motivated motivated to change his attitude. A few changes in the form and a new key were supposed to end this little skirmish. Supposed to ....

Obviously he did want his little revenge so he tried to sell me an upgrade for full insurance coverage. I had to say no to that, to which he replied that, in case of damages, I would have to cover Can$ 500.- per case myself. I told him that I had already paid for full coverage in advance and also told him I insisted on a full tank when I picked up the car. After that, I headed out to find the car.

To tell the truth, the car proved to be a real gem during the whole trip. It consumed less than 9 liters of gas per 100 kms , which is just about fantastic for a Chrysler Town and Country. I also slept in the car in the first 21 nights, and it made me feel pretty much at home.

After stopping in Chilliwack for provisions, I drove 50 kms to Hope to spend my first night in BC. I had in mind to catch a steelhead the next morning and then get going towards Smithers. Before I could get to sleep, however, I had to rearrange the luggage and set up my bed. Then, for the first time in all my trips to Canada, I slept 6 hours in a row on my first night. This left me ample time to prepare breakfast, because before 7 a.m. it was too dark to get out on the water. For my morning tea, I had brought a little 12 Volt water boiler form Germany. It served me well during the entire trip and when days kept getting colder, I also used it in the evenings.

After breakfast I proceeded to unpack my trusty Sage, my Vosseler DC 4, to rig them up using 5 meters of .25 mm Stroft for a leader and a gold bead head nymph for a fly. By then it was 7:30 a.m. and I got into my waders, checked if my vest held everything I thought I needed, and moved on. The distance from the car to the river was only 50 meters, but in this kind of situation you tend to remind yourself that you're all alone and you had better watch your step a little more closely than when you're moving with a group. The river holds low water which is a rather bad sign as steelhead frequently lie in waiting downstream of the canyons in low water conditions. Well, I was lucky because within 10 minutes a steelhead of roundabout 70 cm fell for my beadhead. Thus my trip to the North started just minutes after 8 a.m.

Just a reminder: Flyfishing for steelhead in Canada is incredible, be it with dries or with nymphs. But while casting dries doesn't need a lot of additional practice once you know the basics, casting heavy bead heads on long - or very long - leaders is a lot trickier. I can only advise you to start practicing that, well before you get to BC. 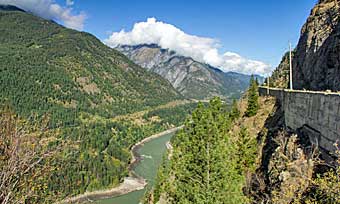 Road along the Fraser River

From Hope to Spences Bridge

A few kilometers before you reach this small town, you will find a carpark by the name of "Goldpan" by the side of the road. As I still had plenty of time to get to Smithers, I spent a few hours panning gold. It was only Saturday morning, and there would not be any fishing for me on the Bulkley before Monday morning. The new regulations for fishing classified waters between Houston and Terrace force anglers from abroad to take a break from fishing for two or three days, that is unless they are willing to spend up to 500$Can per day. 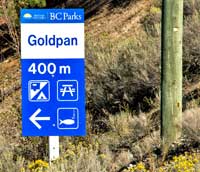 Time enough to use my gold pan for a couple hours. Not far away from this place I had plans for a larger experiment in gold panning two or three weeks later. You wouldn't believe it how easily you can put your life in jeopardy on such occasions, but I'll tell you about that later.

I did manage to get a few tiny gold flakes to put in my collecting phials, and I hadn't planned to classify them by place of origin on this trip anyway. I got to Spences Bridge around noon, took a short break at the local coffee shop, and proceeded to drive towards Williams Lake. In Cache Creek, roughly 50 kms north from Spences Bridge, Highway #1 sweeps to the East and you leave it, and continue on Highway #97. From Cache Creek to Williams Lake you have 200 kms to drive, i.e. Cache Creek is halfway from Hope to Williams Lake.

Years ago I have fallen into the habit of using these long drives to eat my meals. So I stopped in 100 Mile House, a slightly larger town, at the local KFC and bought me a three piece meal for the road, which I ate during the next 30 minutes on the road.

On previous trips I used to pay a visit to a friend residing in Williams Lake, but since he has moved to Edmonton, I only stop for gas. Then I get on my way for the next 250 kms to Prince George via Quesnel. When traveling with a group, Prince George is the place to stay overnight. After all, once you get there you have traveled 650 kms from Hope. That's not too bad, taking into account all the sights to see and all the photographs to take along the way. I continued a little bit further and spent my night on a car park west of Prince George on Highway #16.

To be continued in the second part of my travelogue of my 2014 trip for steelheading on the fly in Canada.