From Prince George to Smithers and farther

I spent the night by the roadside and continued westward on Highway 16. It is a drive of roundabout 160 kms from Prince George to the town of Fraser Lake. This town has not much to offer except one of the best five rivers for rainbows in all of North America, the Stellako. This river is rather short. It runs about 12 kms from Francois Lake to Fraser Lake. 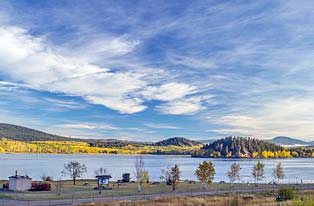 Recreational area at the Fraser lake

Fraser Lake is fed by the Stellako River, and its waters feed the Nechako River which in turn runs into the Fraser River near Prince George. This river system is the highway for the salmon runs entering the Fraser near Vancouver.

The Stellako rainbows can be caught on dries any time of the year - except during salmon runs. As soon as the salmon run starts, they are completely focused on red and that's it for dry fly fishing. A few times I tried to fish dries in September, but I have given it up. The river is then so packed with salmon that flyfishing responsibly is all but excluded. When I walked along the shore dragging my dry fly behind me, I foul-hooked two salmon within minutes. I tried to use nymphs, but every single cast ended with a foul-hooked salmon - no fun, believe me!

In 2014, I stopped by the Stellako running out of Francois Lake, but I didn't fish. The Stellako being a classified water, the licence costis over 20 $ Can. per day. This fee can be considered well invested any time of the year except September and October. So I continued leisurely towards Smithers.

The next stop is Houston, BC (not Texas, mind you). This town is about 150 kms from Fraser Lake, a ride which takes about 2 hours. Houston is the perfect place to fish the Morice. The Morice is actually the main source of the Bulkley, which gets its name, however, from a very small tributary right there in Houston.

Unfortunately there had been a rather ugly incident involving an angler and an irate mama grizzly a few months ago. Moreover, I have so far not achieved to catch a steely in the Morice. Anyway, I didn't feel like taking that risk all alone; if you're with a group, you might try some time. 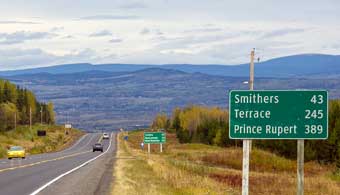 It takes about 200 kms from Smithers to Terrace

There was plenty of time left to get to Smithers, so I took a little detour to the Quick Bridge. In good years you may always spot a few steelies upstream or downstream from the bridge. This year there weren't any, so I continued towards Smithers.

Between the Quick Bridge and Smithers you find the little town of Telkwa. It doesn't have much to offer except one of the best steelhead pools I know, and it is situated right in town. We used to have lots of fun on that pool, except in 2013. The four of us got to play a total of 3 steelies in the Bulkey in 2013, and we lost two of them. So the overall result for four anglers fishing four days on the Bulkley in 2013 was one steelhhead.

So I felt I had a matter to settle.

Telkwa is only about 15 kms from Smithers, and a stopover would only delay me by about 15 minutes, so I thought. Anyway, I went to Oscar Sports, a sporting goods store with lots of supplies for flyfishers. I have been in business relations with them for many a year and I usually go there to ask what's up around the Bulkley. This time I inquired specifically about the current situation on the Copper River. 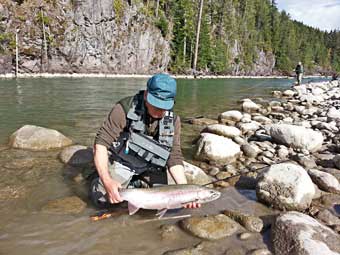 The Copper in ideal water conditions

As they didn't have the latest news on the Copper, they called someone in Terrace, where the Copper runs into the Skeena. The info we got was that the Copper was fishable and the situation was further improving. So I bought licenses for Monday and Tuesday, got some food and drink and off I went. Although I hadn't been tarrying, I didn't hit the Highway before 9 p.m.. The distance to the mouth of the Copper is about 200 kms, followed by about 40 kms gravel road.

In short, it started raining after about 50 kms, and it didn't stop when I got to the mouth of the Copper, it only got worse! Fishing near the mouth was absolutely impossible. To really make sure, you have to drive up the Copper about 35 kms. There is a tributary frequently carrying muddy water form glacier runoff, but even upstream from that tributary the Copper remained absolutely unfishable. My mood dropped below freezing point.

By then it was about midnight and I didn't have much choice except getting ready to sleep, and wait for the next day to see which turn things might take. I had parked the car inside a little picknick area. Two hours later I was lucky enough to wake up and see the water overflowing and threatening to lock me inside this area.

I was pretty lucky to make it back to the highway, and I drove right back to Smithers. The first thing next morning, I went to the sporting goods store and got two new licenses, this time for the Bulkley. The lady who had sold me the licenses for the Copper the day before looked a bit shocked. She handed me an address where complaints about shops or guides could be filed. So far I have not used it.

The Bulkley in perfect condition

The Bulkley River in British Columbia

The Bulkley was just about perfect. The water conditions were top, there weren't too many flyfishers around, and the air temperature around noon was a comfortable 15°C (59 °F). So I spent Monday and Tuesday on the Bulkley near Telkwa. At first I still thought about the lousy result we had in 2013, but the first hour on the water changed that entirely.

As I mentioned above, four of us together had caught a single steelhead in four days of fishing on the Bulkley. I must admit that very well renowned Bulkey guides had called 2013 a very bad year for steelhead on the Bulkley.

Well, 2014 definitely was not a bad year. I fished on the Bulkley for three days and I landed nine steelhead, none of them on a dry fly, though. Bear in mind that fishing heavy nymphs on very long leaders of 0.25 mm Nylon is a bit outside the ordinary. Casting, mending and playing a steelhead under these conditions requires your utmost attention.