Flyfishing for Steelhead in British Columbia 2015

After several years, we decided to go on a tour with RVs in British Columbia again. The fact that we got good prices for the flights as well as for the RVs helped with our decision. Three of us started out together on the same day and one joined us a few days later in Smithers.

In my first years of traveling in BC (1990 - 2005) we didn´t need to spend the first night in a motel before picking up our RVs. This modus operandi was new to me, and I found it cumbersome, as you have to part with several hundred Euros when you pick up your RV in the morning.

After spending the night at the motel and a breakfast in a luncheonette we called a taxi and drove to the RV rental service. Up to then I had never used a taxi in Canada, so I consulted Google for the fare we were to expect. The bill finally turned out a pleasant surprise, because it was considerably less than what Google had prepared us for.

As there was no queue at the rental station, we were able to roll out at 1 pm. We got food supplies and drinks in Chiliwack, drove to Hope and spent our first night in our motor homes.

During the first days in BC we never get too much sleep due to jet lag, so we had time enough to stash most of our clothing, fishing equipment, rods, and waders. After breakfast we took off towards the North. We knew beforehand we´d be in Smithers much too early if we just drove there without any stops.

So we had agreed among us to give fishing for Arctic Grayling in BC a try for the first time. Before we left Germany, we had contacted a flyfishers´ club in Prince George to find out about the general possibilities around this time of year, about the waters to fish, and whether to use dries or nymphs. Well, we got a recommendation for the Anzac River. They said it was a little late in the year already, but it would be worth a try anyway.

So we drove from Hope to the village of Bear Lake, which we reached after dark. No wonder, the ride being a total of 710 km long. 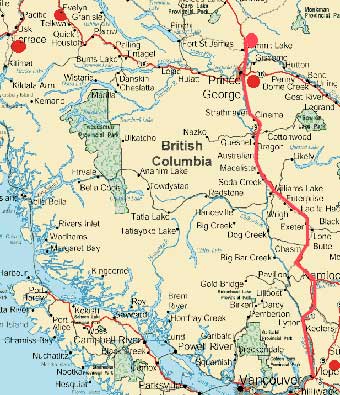 Here I have a little map to make you more familiar with distances and relative positions of the places mentioned. The red line marks the way from Hope to Bear Lake via Prince George. North is up. The two dots in the upper right are Terrace and Smithers, Smithers being a little farther north than Terrace. On the right you can just about read Prince George, which is 575 km from Terrace. This way you get some idea about the distances from one place to another.

The distance from Bear Lake to the Anzac is roughly 80 km, the surfaces of which are three fifths tar macadam and two fifths gravel. The gravel part of the road is pretty rough on the vehicles. I´ve driven quite a few dirt tracks in RVs, but these really gave me the creeps. Well, we finally made it, despite sand drifts, monstrous potholes and some very narrow passages. The other vehicles we met on the road were mostly quads.

The idea of fishing the Anzac proved to be great. Each of us had caught grayling, though none above 40 cm length. I still don´t know what kind of creature took my strike indicator twice, each time almost wrestling the rod out of my hands. The way things look today, our tour in 2016 will take us to the Anzac again. Maybe I´ll find out then.

Saturday evening we took off for Smithers. We drove as far as Fraser Lake, so the remaining 220 km were an easy ride on Sunday.

The new fishing regulations don´t necessarily make planning your trip any easier. Classified waters may only be fished on weekends by anglers accompanied by guide. On some waters the weekend includes Friday, on others it doesn´t. So our immediate goal was fishing the Bulkley River on Monday. On Sunday we had the tackle shop print our classified licenses. To reduce the workload in the shops, we prepare our application on the Internet, pay online, and only have the shop print out the licenses for us. 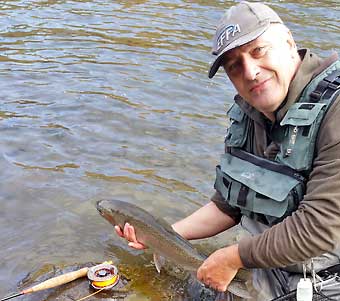 Releasing the Years 2nd Steelhead, taken from the Bulkley

The first hours were spent fishing around Telkwa. In the afternoon, we changed location and continued near the Quick Bridge. Monday brought me 5 Steelhead, which I considered pretty good. My traveling companions still seemed to have problems getting started. Our way of fishing is rather different from the way the locals go about it. They fish large streamers across and down on the swing whereas we fish relatively small and heavy nymphs upstream dead drift, just as we do on our home waters in Europe. I have been doing it this way since my first fishing day in BC in February, 1990, and I´ve had good success doing so. The hard part is that you have to use very long leaders - 4 to 6 m! Casting this contraption isn´t very easy, so my advice has always been to practice it at home until you achieve sufficient proficiency. Unfortunately, many of my co-travelers ignore this advice, thus spending their first - expensive - days with casting practice instead of fishing.

My lucky streak held out on Tuesday, bringing me three steelies, the largest one measuring 92 cm and thus beating my previous personal best for the Bulkley: 87 cm. I caught that fish right in the town of Smithers. By then it was about time to run to Smithers Airport and pick up my friend Rafi. He had been unable to make our departure date and therefore took a connecting flight right to Smithers.

Three Bulkley Steelhead. On the Left my Friend Rafi, on the Right my Friend Michael

We then continued fishing the Bulkley on Wednesday through Friday. Each of us managed to hook steelies. Our fourth man, Wolfgang, unfortunately failed to land any of his. During these three days we tried several other spots on the Bulkley. Friday afternoon we went on our way to Terrace. Sometimes you´ll have to skip the Copper, and Terrace altogether, due to meteorological conditions. This year, the forecast was just about perfect. The water was still rather high on Friday, but following a few days without rain, the levels on the Copper sink quickly.

As usual, we stopped by ´Ksan in Hazleton, and made another stop in Kitwanga. In Kitwanga, Highway 37 forks off in direction North. Standing there atop the Skeena Bridge and enjoying the scenery, you seem to feel the air coming out of Alaska. In 2016 we just might follow this highway into the North and fish a tributary to the Nass River. From Kitwanga, you have barely 100 km to go to Terrace. We spent the evening pleasantly in a nice pub. Unfortunately the campground of Ferry Island had already closed for the season.

Terrace and the Copper River

Fishing the Skeena watershed on Saturdays and Sundays is a bit complicated. There´s lots of rivers, but on classified waters fishing on weekends is limited to anglers accompanied by a guide. Large stretches of the Skeena itself may be fished without guides. We spent the days without flyrods, but had a good time anyway.

We had planned to fish the Copper on Monday and Tuesday. The river was fishable, but was just about to sink from 200 m³ to 60 m³. The situation corroborated my previous experiences in so far as the river was full of fish, but their reluctance to take a fly would last another few days. After a few days, however, the Copper rose to 800m³. As we intended to also fish on Vancouver Island, we headed down south on Tuesday.

This road is so beautiful you could easily spend a day or even several days there. Whether out in the wilderness or in places like Pemberton or Whistler, you run into gorgeous scenery all the time. Trails in provincial parks lead visitors from the roadside into complete solitude, but don´t forget: this is bear country! Anyway, this route deserves a lot more attention! 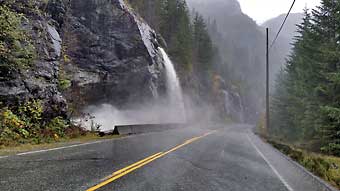 In a nutshell: as far as Steelhead were concerned, Vancouver Island was but a source of disappointment. All long the island´s western shore, e.g. in Gold River, fly fishing was practically impossible. As you can see on the photograph, several waterfalls ran from the mountains right onto the road. So after checking out the possibilities we drove back to Campbell River on the eastern coast after only a day. Campbell River offers a lot more choices for shopping, eating out, or having a drink in good company.

The Campbell and Quinsam Rivers were fishable. The Quinsam is a winter run river for Steelhead, and lately I haven´t caught any in the Campbell either. Being there, we decided to give it a try anyway.

We were lucky enough to catch a few Cohos, and I managed to take a nice Chum on the Campbell. 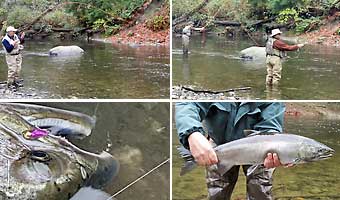 Fishing for Coho with hook size 10

When I was still selling German flyfishing supplies to Canadian retailers, I kept a stock in the town of Campbell River. That is also where my Canadian fly fishing experience tarted out in 1990. That is why I am particularly familiar with the local situation.

My friends were quite surprised when I showed them the nymph I use for Coho. If you fish a size 10 nymph for fish as strong as Coho, don´t ever overestimate the strength of your hook!

In the Quinsam three different sizes of Coho may be present: Size one is about 6 pounds apiece, size two weighs around 12 pounds, and then there's Jacks, about 40 cm in length.

After two more days we headed back to the ferry and eventually the mainland. As we had to go through Vancouver on Highway #1, I visited a wholesale dealer with whom I have been cooperating for years.

The last days we spent near Hope, the big one is from the Bulkley.

The problems prohibiting fishing the Coquihalla were still unsolved and we had no intention to spend the last days of our trip fishing the Vedder River near Chilliwack amidst armies of bait casters. There is, however, one more river in the Hope area which yielded two nice fish to me two years ago. This river runs through a lake where you may also fish for Steelhead. There is no fishing permitted upstream from the lake.

I hope you have enjoyed my description so far and that it may have whetted your appetite for Western Canada.