Fly fishing for Steelhead on the Copper river

How to get to the Copper in British Columbia, Canada

The Copper River is practically just directly outside the town of Terrace. There are several ways of getting there. The most frequently used one is to come by car or RV from the East. You should be aware, however, that RVs, beautiful as traveling with them may be, aren´t the best choice for some of the dirt roads you may encounter. When I was traveling in RVs with friends, we always used to drive up alongside the copper, which gave us the surname of "crazy" Germans. From Prince George you use Highway 16, aka Yellowhead Highway. You reach Terrace via Houston, Smithers, and New Hazelton. From Prince George to Terrace is a 550 km drive, from Vancouver to Prince George almost 800 km, and another 300 km from Seattle.

An alternative would be via Vancouver Island. Take the ferry at Port Hardy to Prince Rupert through the Inland Passage to Prince Rupert. From there to Terrace there is only a 150 km drive. Because the ferry is costly, especially if you use an RV this is a relatively expensive way to get there. Seeing the coast, Orcas, Fin Whales, Kermode Bears and Mountain Goats along the way up there may be worth the extra money, though. If you have the time, the way back by road will be less costly. Of course you can also fly into Terrace. If you are spending 10 days or less in BC, this would be the vehicle of your choice. 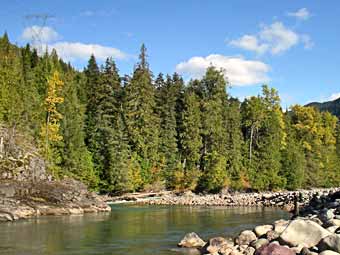 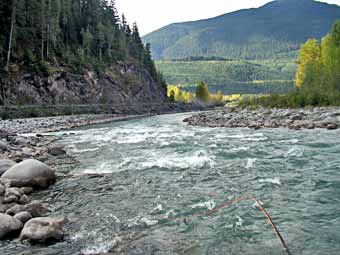 How to fly fish there

The Copper River is definitely one of the most beautiful and promising rivers for fly fishing for steelhead. Especially because it is relatively easy to access. I must admit that I´ve never fished the lower parts of the river, as it is only 5 km from Terrace. My activities with nymphs and dries start 35 km above the junction of the Copper into the Skeena. Up there the Copper is clear most of the time. I should also mention that I´ve caught steelheads in the Copper casting dries upstream. 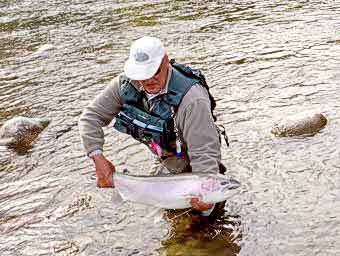 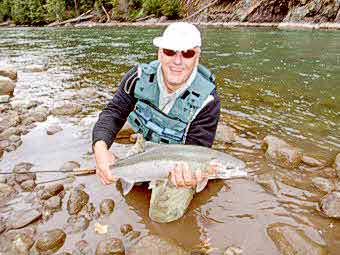 Lest I forget: if you drive to some fishing spots on the Copper River, you may be as far as 50 km from the highway. In case any part of your car breaks down, it may be days before help gets to you. In 2013 I had two tires blow out on me which is no fun if you only have one spare. It is therefore a good idea to inform someone (e.g. accommodation or fly shop) where you are going and when you expect to be back. It goes without saying that you will also inform them of your return as soon as you get back. Otherwise a big search might be initiated. In case such action was unnecessary, because you had already made it home safely without telling anyone, you might face a bill of several hundred dollars.