The Campbell River on Vancouver Island

How to get to the Campbell River for fly fishing

The Campbell being on Vancouver Island, you get there via either Nanaimo, Victoria or Port Hardy.The Ferry always arrives at Nanaimo if you leave the continent either from Horseshoe Bay north of Vancouver or from Tsawassen south of Vancouver. From Nanaimo you follow Highway # 19, a.k.a. Inland Island Highway, in northern direction until you reach the town of Campbell River. The distance is slightly more than 150 km, and the drive takes just about an hour and a half. If you arrive on the island via Victoria, your drive is 80 km longer. From Port Hardy, the distance is 230 km and will take roughly three hours. Of course you may also get to Campbell River, British Columbia, Canada by airplane, e.g. from Vancouver.

My personal relation to the Campbell River and to the Quinsam River is a very special one, as these two rivers have left a lasting impression which has lured me back to Canada many times later on.

It is hard to believe but the Quinsam and the Campbell were the main rivers on my first trip to Canda to flyfish for steelhead in 1990. At that time, I managed to hook 24 steelies within eight days. Ever since, however, the numbers on these rivers have been decreasing. Since the stocking program for summer run steelhead expired a few years ago, fishing nymphs or dries for steelhead on the Quinsam and the Campbell is pretty pointless. 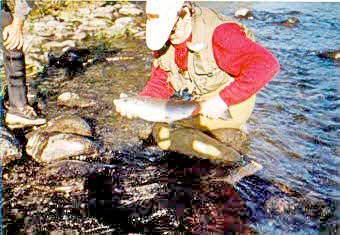 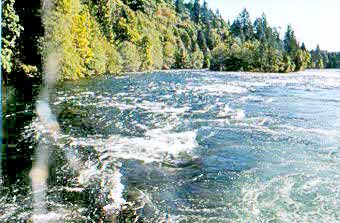 The upper end of the fly fishing only part 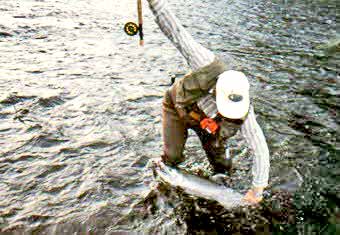 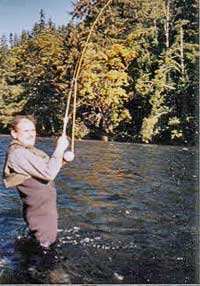 Lately there seems to be a little silver lining popping up on the horizon as the stocking program has been resumed. One possible reason for the government´s change of mind may be the fact that many angling tourists apparently have voiced their discontent with the situation regarding steelhead. To do the Campbell justice I have to mention that it has in all these years always been an excellent river for salmon. Very large king salmon run up the Campbell as late as October.

Another plus for the Campbell is that of the 5 km open to fishing, the upper 1.5 km are Fly Fishing Only. In the upper part of the fishery, which ends at a hydroelectric plant, there are two islands, accessible in chest waders under normal water conditions. You should, however, leave the river bed immediately should you hear a very loud siren while you´re fishing. And be careful when wading: the boulders are covered by slimy light green algae rendering them very slippery.

Many locals and tourists use the trails along the river for jogging, thus creating a good deal of traffic. The trails are far enough from the shoreline as not to interfere with our casting. But they seem to be too busy for black bears. Of course this does not amount to a guaranty, but the probability of running into a black bear when fishing the Campbell is very low. Until today I make a point of visiting the Campbell whenever I am on the island for any other reason. When traveling in February, it is a must in my itinerary.